I like to watch cooking shows. Not intense stuff like “Iron Chef” or anything, but how-to’s and lighter competitions, etc. I found “Struggle Meals” on HULU and thought it was a really great and fun show. The host shows you how to make a meal for 2-6 people, on less than $2 per serving. One episode he made pierogies, and I thought, yep, I’m gonna make those. The only downside is he never gives any measurements. So I used a dough recipe from Allrecipes.com. This one is called “Grandma’s Polish Pierogies,” https://www.allrecipes.com/recipe/84706/grandmas-polish-perogies/. This link also has the recipe to make the filling, but I made my own turkey dinner flavored filling with left-overs. While not authentic, they were very delicious.

The dough recipe makes A LOT of dough. I don’t have a pierogi maker, which would have made this so much less time and work intensive, so I froze half of my dough to roll out another day. I also realized I no longer have a rolling pin. If you don’t either, don’t fret! Any round, heavy-ish thing will work. I used a round, quart-sized canning jar, and that rolled out nicely. I used a drinking glass to cut out my dough circles also. This was the first time I’ve ever made pierogies, and I guess I may have rolled some out a little too thin, although they all stayed together, but the recipe says the yield would be 60 pierogies, where I’m getting about 80 from mine.

I didn’t get pictures of the dough mixture, but it is very thick and heavy. If you’re using your mixer make sure you use your dough hooks, and not your beaters.

Twist your cup, etc tightly to the counter to cut your pierogi circle. On my hand is about the thickness I was aiming for. I layered the circles on a plate until I was ready to fill them.

A small rounded cereal spoon of filling is what fit nicely in my pierogies, leaving me room to crimp their edges. Not shown, because both my hands were in use, is that you need a small dish of water and dip one of your pinkies in and then run that around one half-circle edge of the dough. This helps glue the dough together. After that, gently push the tongs of a fork all along the edge of the pierogi to seal. I made about 15 at a time before I crimped them shut.

I boiled a few up to see how they turned out, the rest I froze without parboiling. They’ll just take longer to boil when I make them from frozen. Boil your pot of water, then gently drop in your pierogies. The great thing about pierogi dough is that it has a self-timer so you don’t have to guess when they’re done. The pierogies will float to the top when cooked through.

After boiling, I drained the pierogies on a paper towel, and melted some butter in a skillet on medium heat. Just a few minutes each side gave the pierogies the crunch I like. If you don’t like them cooked in the skillet, they were also delicious with just boiling. 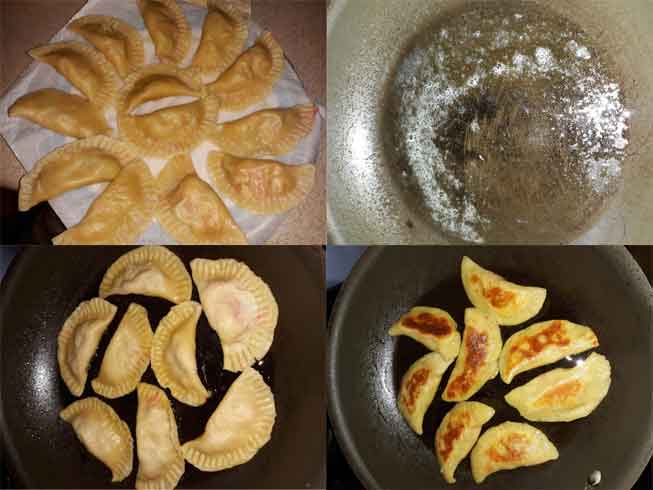 My pierogi filling was made up of leftover mashed potatoes, turkey gravy, small bits of turkey, a can of peas, and bacon, ‘cause why not? It made a nice semi-moldable mixture that was still soft, but firm enough to stay inside the pierogi. Not authentic, but delicious and used up leftovers in a fun way. I say experiment with your fillings, it is after all just dough!