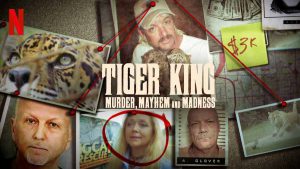 The Tiger King, a Netflix documentary released on March 20, 2020, is the outlandish true tale of Joe Exotic, a big cat enthusiast and a for-profit zoo owner and his epic feud with Carole Baskin, a one-time big cat pet owner turned Big Cat Conservationist. This show also features Jeff Lowe (a businessman with a shadowy past) Bhagavan Antle (another zoo owner with a complicated love life), as well as Joe’s motley crew of zoo workers with a surprise hero. The timing of this documentary coincided perfectly with many Americans being newly quarantined at home and looking for a distraction. The series was watched by 34.3 million people in the first ten days of the series release.  At its heart, The Tiger King is a true crime documentary.  If you liked that show, and are looking for something like it, we’ve collected some digital titles from our digital catalog that you may enjoy!

The Feather Thief On a cool June evening in 2009, after performing a concert at London’s Royal

Academy of Music, twenty-year-old American flautist Edwin Rist boarded a train for a suburban outpost of the British Museum of Natural History. Home to one of the largest ornithological collections in the world, the Tring museum was full of rare bird specimens whose gorgeous feathers were worth staggering amounts of money to the men who shared Edwin’s obsession: the Victorian art of salmon fly-tying. Once inside the museum, the champion fly-tier grabbed hundreds of bird skins—some collected 150 years earlier by a contemporary of Darwin’s, Alfred Russel Wallace, who’d risked everything to gather them—and escaped into the darkness. Two years later, Kirk Wallace Johnson was waist high in a river in northern New Mexico when his fly-fishing guide told him about the heist. He was soon consumed by the strange case of the feather thief. What would possess a person to steal dead birds? Had Edwin paid the price for his crime? What became of the missing skins? In his search for answers, Johnson was catapulted into a years-long, worldwide investigation. The gripping story of a bizarre and shocking crime, and one man’s relentless pursuit of justice, The Feather Thief is also a fascinating exploration of obsession, and man’s destructive instinct to harvest the beauty of nature.

Empire of Sin a vibrant and immersive account of New Orleans’ other civil war, at a time when commercialized vice, jazz culture, and endemic crime defined the battlegrounds of the Crescent City Empire of Sin re-creates the remarkable story of New Orleans’ thirty-years war against itself, pitting the city’s elite “better half” against its powerful and long-entrenched underworld of vice, perversity, and crime. This early-20th-century battle centers on one man: Tom Anderson, the undisputed czar of the city’s Storyville vice district, who fights desperately to keep his empire intact as it faces onslaughts from all sides. Surrounding him are the stories of flamboyant prostitutes, crusading moral reformers, dissolute jazzmen, ruthless Mafiosi, venal politicians, and one extremely violent serial killer, all battling for primacy in a wild and wicked city unlike any other in the world.

Devil in the White City (audiobook) and available as an EBOOK Two men, each handsome and unusually adept at his chosen work, embodied an element of the great dynamic that characterized America’s rush toward the twentieth century. The architect was Daniel Hudson Burnham, the fair’s brilliant director of works and the builder of many of the country’s most important structures, including the Flatiron Building in New York and Union Station in Washington, D.C. The murderer was Henry H. Holmes, a young doctor who, in a malign parody of the White City, built his “World’s Fair Hotel” just west of the fairgrounds—a torture palace complete with dissection table, gas chamber, and 3,000-degree crematorium. Burnham overcame tremendous obstacles and tragedies as he organized the talents of Frederick Law Olmsted, Charles McKim, Louis Sullivan, and others to transform swampy Jackson Park into the White City, while Holmes used the attraction of the great fair and his own satanic charms to lure scores of young women to their deaths.

The Stranger in the Woods Many people dream of escaping modern life, but most will never act on it. This is the remarkable true story of a man who lived alone in the woods of Maine for 27 years, making this dream a reality—not out of anger at the world, but simply because he preferred to live on his own. In 1986, a shy and intelligent twenty-year-old named Christopher Knight left his home in Massachusetts, drove to Maine, and disappeared into the forest. He would not have a conversation with another human being until nearly three decades later, when he was arrested for stealing food. Living in a tent even through brutal winters, he had survived by his wits and courage, developing ingenious ways to store edibles and water, and to avoid freezing to death. He broke into nearby cottages for food, clothing, reading material, and other provisions, taking only what he needed but terrifying a community never able to solve the mysterious burglaries. Based on extensive interviews with Knight himself, this is a vividly detailed account of his secluded life—why did he leave? what did he learn?—as well as the challenges he has faced since returning to the world.

Filthy Rich: A Powerful Billionaire, the Sex Scandal that Undid Him, and All the Justice that Money Can Buy: The Shocking True Story of Jeffrey Epstein  (audiobook) also available as EBOOK

You’ve read the Jeffrey Epstein headlines, now get the full story. The world’s bestselling author, James Patterson, has written the definitive book on the billionaire pedophile at the center of the newly unsealed federal sex crimes case. Jeffrey Epstein rose from humble origins into the New York City and Palm Beach elite. A college dropout with an instinct for numbers — and for people — Epstein amassed his wealth through a combination of access and skill. But even after he had it all, Epstein wanted more. That unceasing desire — and especially a taste for underage girls —resulted in sexual-abuse charges, to which he pleaded guilty and received a shockingly lenient sentence. Included here are police interviews with girls who have alleged sexual abuse by Epstein, as well as details of the investigation against him.

The Murder Room: The Heirs of Sherlock Holmes Gather to Solve the World’s Most Perplexing Cold Cases Thrilling, true tales from the Vidocq Society, a team of the world’s finest forensic investigators whose monthly gourmet lunches lead to justice in ice-cold murders Three of the greatest detectives in the world—a renowned FBI agent turned private eye, a sculptor and lothario who speaks to the dead, and an eccentric profiler known as “the living Sherlock Holmes”-were heartsick over the growing tide of unsolved murders. Good friends and sometime rivals William Fleisher, Frank Bender, and Richard Walter decided one day over lunch that something had to be done, and pledged themselves to a grand quest for justice. The three men invited the greatest collection of forensic investigators ever assembled, drawn from five continents, to the Downtown Club in Philadelphia to begin an audacious quest: to bring the coldest killers in the world to an accounting. Named for the first modern detective, the Parisian eugène François Vidocq-the flamboyant Napoleonic real-life sleuth who inspired Sherlock Holmes-the Vidocq Society meets monthly in its secretive chambers to solve a cold murder over a gourmet lunch. The Murder Room draws the reader into a chilling, darkly humorous, awe-inspiring world as the three partners travel far from their Victorian dining room to hunt the ruthless killers of a millionaire’s son, a serial killer who carves off faces, and a child killer enjoying fifty years of freedom and dark fantasy. Acclaimed bestselling author Michael Capuzzo’s brilliant storytelling brings true crime to life more realistically and vividly than it has ever been portrayed before. It is a world of dazzlingly bright forensic science; true evil as old as the Bible and dark as the pages of Dostoevsky; and a group of flawed, passionate men and women, inspired by their own wounded hearts to make a stand for truth, goodness, and justice in a world gone mad.

Catch and Kill:Lies, Spies, and a Conspiracy to Protect Predators (audiobook) also available as EBOOK. In a dramatic account of violence and espionage, Pulitzer Prize-winning investigative reporter Ronan Farrow exposes serial abusers and a cabal of powerful interests hell-bent on covering up the truth, at any cost. In 2017, a routine network television investigation led Ronan Farrow to a story only whispered about: one of Hollywood’s most powerful producers was a predator, protected by fear, wealth, and a conspiracy of silence. As Farrow drew closer to the truth, shadowy operatives, from high-priced lawyers to elite war-hardened spies, mounted a secret campaign of intimidation, threatening his career, following his every move, and weaponizing an account of abuse in his own family. All the while, Farrow and his producer faced a degree of resistance they could not explain — until now. And a trail of clues revealed corruption and cover-ups from Hollywood to Washington and beyond. This is the untold story of the exotic tactics of surveillance and intimidation deployed by wealthy and connected men to threaten journalists, evade accountability, and silence victims of abuse. And it’s the story of the women who risked everything to expose the truth and spark a global movement. Both a spy thriller and a meticulous work of investigative journalism, Catch and Kill breaks devastating new stories about the rampant abuse of power and sheds far-reaching light on investigations that shook our culture.
Scroll Up