Holi is the Hindu spring festival, the Festival of Colors, it symbolizes the victory of good over evil as well as new beginnings.  Originating from the Indian subcontinent, Holi is celebrated predominantly in India, but has also spread to other areas of Asia and parts of the Western world.

Holi takes place on the full-moon day of Phalguna (sometime at the end of February or beginning of March).  It marks the end of winter and welcomes the spring season.  This holiday celebrates by playing with color, meeting and greeting friends and family, and a fresh start.

Holi is associated with the God Krishna.  When Krishna was a baby, he acquired a distinctive blue skin color.  Later, when he was older he would feel sad, thinking that Radha and the other villagers would not like him because of his blue skin coloring.  Krishna’s mother asked him to go and color Radha’s face with any color he wanted to.  When Krishna applied color to Radha, they both became a couple, and since then, people have started playing with colors on Holi.

Participants throw colored water and powders on one another.  The Holi festival incorporates a pole, similar to the Maypole of Europe, as well as Bonfires, and street dancing, accompanied by loud drums and horns.  At the festivals conclusion, when everyone bathes, dons clean white clothes, and visits friends, teachers, and relatives, the ordered patterns of society are reasserted and renewed.

The Children’s Department at the Steele Memorial Library will celebrate Holi with a special story-time and craft on Monday March 9th at 4:00PM. 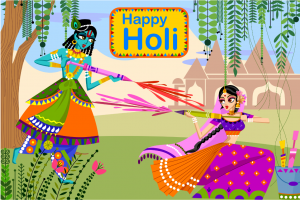