Join the Children’s Department at the Steele Memorial Library for the month of March as we continue our Year of Travel and head to India.

India, officially known as the Republic of India, is the largest country in South Asia.  It is a constitutional republic consisting of 29 states, 6 union territories; and the Delhi national capital territory, which includes New Delhi, India’s capital.  It is the seventh-largest country by size.  India is the second-most populous country in the world and the most populous democracy in the world with over 1.4 billion people.

India is a pluralistic, multilingual and multi-ethnic society. Pluralism is a political philosophy that recognizes and affirms the diversity within a political body, which permits the peaceful coexistence of different interests, convictions, and lifestyles.

India remains one of the most ethnically diverse countries in the world. Apart from its many religions and sects, India is home to innumerable castes and tribes, as well as to more than a dozen major and hundreds of minor linguistic groups from several language families unrelated to one another.

India is officially a secular country and has no state religion. The Indian subcontinent is the birthplace of four of the world’s major religions; namely Hinduism, Buddhism, Jainism, and Sikhism.  Religious minorities, including Muslims and Christians who still account for a significant proportion of the population.

Learn even more about India with our monthly scavenger hunt! 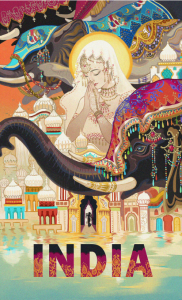