At Night All Blood Is Black: A Novel by David Diop and Anna Moschovakis

*Winner of The 2021 International Booker Prize*

Alfa Ndiaye is a Senegalese man who, never before having left his village, finds himself fighting as a so-called “Chocolat” soldier with the French army during World War I. When his friend Mademba Diop, in the same regiment, is seriously injured in battle, Diop begs Alfa to kill him and spare him the pain of a long and agonizing death in No Man’s Land.

Unable to commit this mercy killing, madness creeps into Alfa’s mind as he comes to see this refusal as a cruel moment of cowardice. Anxious to avenge the death of his friend and find forgiveness for himself, he begins a macabre ritual: every night he sneaks across enemy lines to find and murder a blue-eyed German soldier, and every night he returns to base, unharmed. At first his comrades look at Alfa’s deeds with admiration, but soon rumors begin to circulate that this super soldier isn’t a hero, but a sorcerer, a soul-eater. Plans are hatched to get Alfa away from the front, and to separate him from his growing collection of enemy hands, but how does one reason with a demon, and how far will Alfa go to make amends to his dead friend? 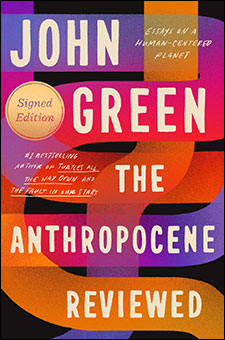 The Anthropocene Reviewed: Essays on a Human-Centered Planet by John Green

The Anthropocene is the current geologic age, in which humans have profoundly reshaped the planet and its biodiversity. In this remarkable symphony of essays adapted and expanded from his groundbreaking podcast, bestselling author John Green reviews different facets of the human-centered planet on a five-star scale—from the QWERTY keyboard and sunsets to Canada geese and Penguins of Madagascar.

Funny, complex, and rich with detail, the reviews chart the contradictions of contemporary humanity. As a species, we are both far too powerful and not nearly powerful enough, a paradox that came into sharp focus as we faced a global pandemic that both separated us and bound us together. 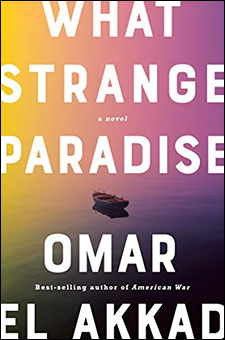 What Strange Paradise: A novel by Omar El Akkad

From the widely acclaimed, best-selling author of American War, a new novel that looks at the global refugee crisis through the eyes of a child.

More bodies have washed up on the shores of a small island. Syrians, Ethiopians, Egyptians, Lebanese, Palestinians, all of them desperate to escape untenable lives back in their homelands. But miraculously, someone has survived the passage: nine-year-old Amir, a Syrian boy who is soon rescued by Vänna. Vänna is a teenage girl, who, despite being native to the island, experiences her own sense of homelessness in a place and among people she has come to disdain. And though Vänna and Amir are complete strangers, though they don’t speak a common language, Vänna is determined to do whatever it takes to save the boy.

In alternating chapters, we learn about Amir’s life and how he came to be on the boat, and we follow him and the girl as they make their way toward safety. What Strange Paradise is the story of two children finding their way through a hostile world. But it is also a story of empathy and indifference, of hope and despair—and about the way each of those things can blind us to reality.