We have previously met the plants in the East and South window. This post will be about the West window and Cozy Corner plants. These plants were the first plants that came to live here. I thought If Steele Memorial can have GIGANTIC plants, Horseheads Library should too. If we want a plant as big as theirs we would have to start from somewhere. This was me experimenting with this new word I learned during lockdown: “PROPAGATION”. This post will focus on the plants that don’t need much light and live on high shelves of books and DVDS. 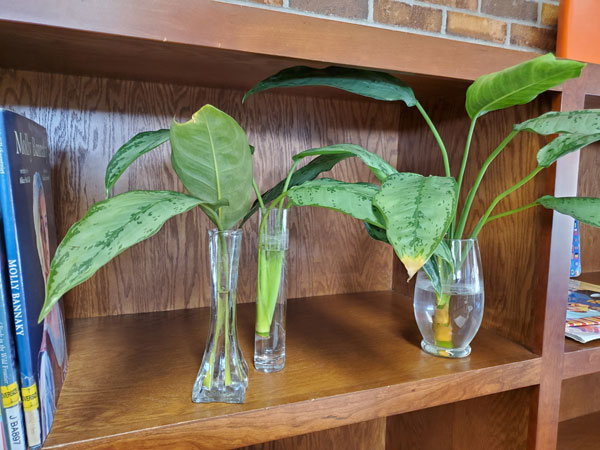 The first indirect light loving plant to come to the library was the Aglaonema, aka Chinese evergreen. I clipped this plant from the Steele Memorial Library’s gigantic plant near the Large Type section. At first I just clipped the plant and put the stalks in 3 vases with water like Goldilocks. A large vase, a medium vase, and just right small vase. Amazingly, the plants never wilted. I really didn’t think you could make a new plant from just a stalk hacked off with scissors borrowed from the customer service desk.

At first the vases lived on top of the DVD collection. After a short time there, yellow spots formed. This was the first time I learned that a plant doesn’t like sunshine and that leaves can get burnt by the sun. This plant wasn’t even in a window and didn’t like the bright afternoon light. I moved these vases to a very high shelf in the children’s department, in a west window where it is bright in the afternoon but no direct sunlight comes in. After some time, the largest clipping started making a new leaf! After many months it even started growing thick white roots. This plant seems to really like this water vase. The medium sized one started growing roots and has been moved into soil. It is going through some shock and isn’t looking great. I have hope it will pull through. Changing plants from water to soil can be shocking to the plant. The smallest vase did not make it. It ended up rotting and smelling very bad. Propagation does not work 100 percent of the time. 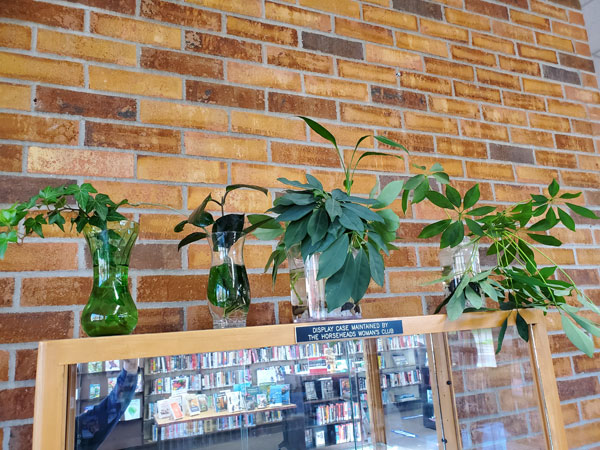 Steele Memorial has two more large plants that I took clippings from. Near the Makerspace is a beautiful Pothos and a large Dwarf Umbrella Tree. Again, I just plopped the Umbrella leaf clippings into vases of water and scattered them around the library, most living on the display case in the West window. After much time roots began to grow, from just leaves! The Umbrella propagations are doing so well. I have made 3 new plants from the clippings. Two of those plants are getting so big they can’t live at the library. The umbrella plant that remains is named Serena Jo, named because it is the second umbrella prop to get potted in soil. Serena Williams is the second tennis twin, and Jo the second sister from Little Women. 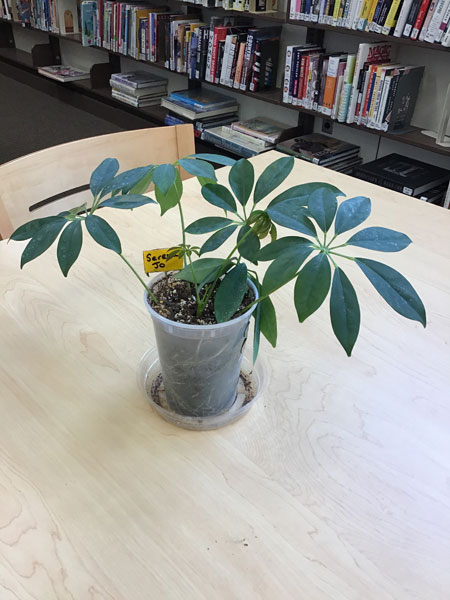 Pothos, or also named Devil’s Ivy, is most people’s first houseplant. Most plant lovers would say they are low maintenance, easy to grow and propagate. I thought this would be easy for me to start with. The pothos clippings really taught me patience, acceptance, and even a little joy. We now have 4 Pothos plants but it all started from the vine I clipped from Steele. One part of the clipping went into a flower vase with water and one long vine clipping went into a plastic bowl with water, and the smaller pieces of the clippings went to my house. Day after day I would check for progress…I was very impatient. The flower vase with water wasn’t progressing, but also not dying. It started to spring a new leaf and finally it started growing a thick root with the curve of the vase, and grew to look like a Rat Tail. That is how this plant got its’ name, Rat Tail. The root grew so large and curly it looked like a piggy tail. This plant has been repotted into a custom container representing our library’s safe space. It has two new leaves. 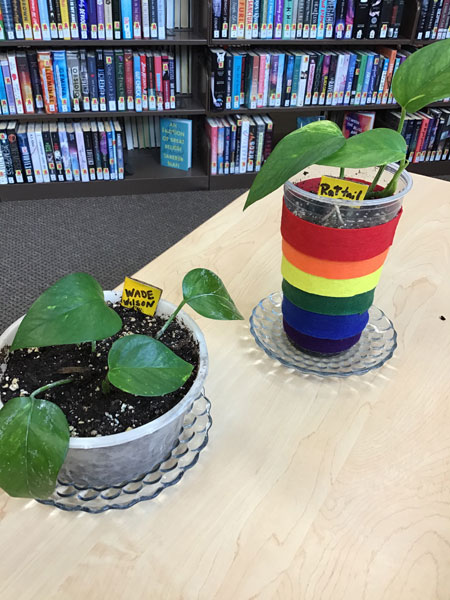 The long vine clipping that was in water looked like it wanted to die. The leaves looked droopy, the plant didn’t look good. I thought since it was a long clipping I could lay it in a circle on dirt and it would grow better. I replaced the water for soil, and waited. After some time, I checked, and this plant looked worse. It looked even more like it wanted to die. I thought, it looked better when it was in just water. I emptied all the soil out and filled the bowl with water. The plant still looked horrible. I was fed up. I decided to stop caring about that plant and let it die. I thought I just can’t grow a pothos, the easiest plant ever. I stopped looking at it, stopped watering it. After many weeks I checked on the bowl. The water that was in it had completely dried up, and can you believe what I saw? The plant grew a new root and started to sprout a small leaf! This plant is unkillable! This plant has been named Wade Wilson, aka Deadpool, for being sassy and undefeated. It now lives in the same bowl, with soil, sprouting new leaves, and looks happy. 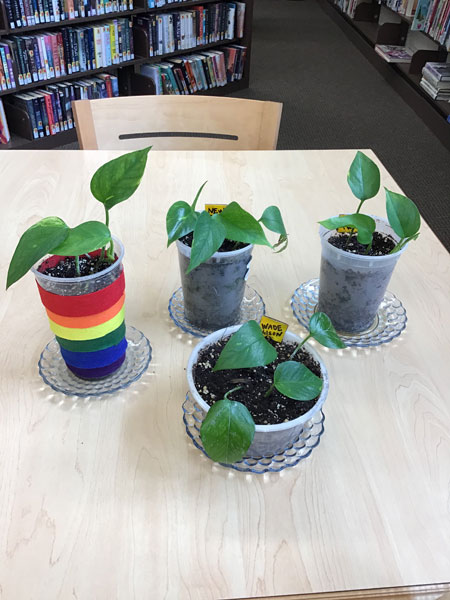 We have two more Pothos plants named the New Twins. They are potted in the same plastic Chinese food container and came from the same plant. Maybe as they grow they will tell us what their names are.

If a part of Steele was living here, I thought West Elmira plants should live here too. West Elmira just happens to have a beautiful Hoya Carnosa in the children’s department. I took a long vine clipping and brought it to its new home in Horseheads. Half the clippings went into soil and half went into vases with just water. All were put in the west window. After about two months roots were long enough to arrange the clippings into pots. The plants were moved into the East window. We now have five beautiful Hoya babies that are doing very well.

We have 39 plants here at this library, they are flourishing and getting so much bigger than the first time I wrote about them. The No-Named plant is adjusting well to its amnesia, but would still love to know its real name. Reward will be given if name is found. Next Plant Blog Post will be an update on all of the plants progress. 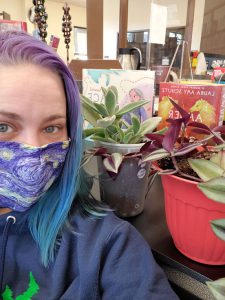