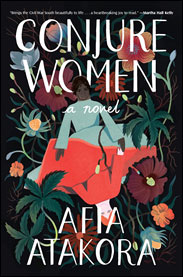 Conjure Women is a sweeping story that brings the world of the South before and after the Civil War vividly to life. Spanning eras and generations, it tells of the lives of three unforgettable women: Miss May Belle, a wise healing woman; her precocious and observant daughter Rue, who is reluctant to follow in her mother’s footsteps as a midwife; and their master’s daughter Varina. The secrets and bonds among these women and their community come to a head at the beginning of a war and at the birth of an accursed child, who sets the townspeople alight with fear and a spreading superstition that threatens their newly won, tenuous freedom.

The Age of Witches by Louisa Morgan

Harriet Bishop, descended from a long line of witches, uses magic to help women in need — not only ordinary women, but also those with powers of their own. She must intervene when a distant cousin wields dangerous magic to change the lives of two unsuspecting young people… one of whom might just be a witch herself. 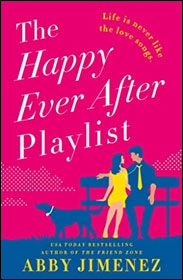 Two years after losing her fiancé, Sloan Monroe still can’t seem to get her life back on track. But one trouble-making pup with a “take me home” look in his eyes is about to change everything. With her new pet by her side, Sloan finally starts to feel more like herself. Then, after weeks of unanswered texts, Tucker’s owner reaches out. He’s a musician on tour in Australia. And bottom line: He wants Tucker back. There’s no telling what could happen when they meet in person.

The Astonishing Life of August March by Aaron Jackson

Abandoned as an infant by his actress mother in her theater dressing room, August March was raised by an ancient laundress. Highly intelligent, a tad feral, August is a true child of the theater –able to recite Shakespeare before he knew the alphabet.

But like all productions, August’s wondrous time inside the theater comes to a close, and he finds himself in the wilds of postwar New York City, where he quickly rises from pickpocket street urchin to star student at the stuffiest boarding school in the nation.

To survive, August must rely upon the kindness of strangers, only some of whom have his best interests at heart. As he grows up, his heart begins to yearn for love—which he may or may not finally find in Penny, a clever and gifted con artist.

A Hundred Suns by Karin Tanabe 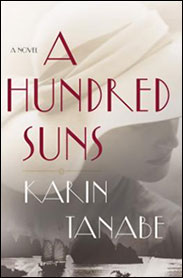 On a humid afternoon in 1933, American Jessie Lesage steps off a boat from Paris and onto the shores of Vietnam. Accompanying her French husband Victor, an heir to the Michelin rubber fortune, she’s certain that their new life is full of promise, for while the rest of the world is sinking into economic depression, Indochine is gold for the Michelins. Jessie knows that their vast plantations near Saigon are the key to the family’s prosperity, and while they have been marred in scandal, she needs them to succeed for her husband’s sake—and to ensure that her trail of secrets stays hidden in the past.

A modern masterpiece from one of Italy’s most acclaimed authors, My Brilliant Friend is a rich, intense and generous hearted story about two friends, Elena and Lila. Ferrante’s inimitable style lends itself perfectly to a meticulous portrait of these two women that is also the story of a nation and a touching meditation on the nature of friendship. Through the lives of these two women, Ferrante tells the story of a neighbourhood, a city and a country as it is transformed in ways that, in turn, also transform the relationship between her two protagonists.

Swimming in the Dark by Tomasz Jedrowski 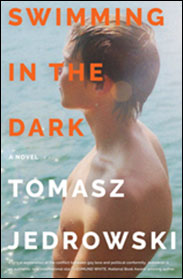 When university student Ludwik meets Janusz at a summer agricultural camp, he is fascinated yet wary of this handsome, carefree stranger. But a chance meeting by the river soon becomes an intense, exhilarating, and all-consuming affair. Ludwik and Janusz fall deeply in love. But in their repressive communist and Catholic society, the passion they share is utterly unthinkable.

Amelia Moore wants only one thing—to secure the future happiness of her younger sister, Clara. With their stepfather’s looming death, the two sisters will soon be on their own—without family, a home, or a penny to their names. When an invitation arrives to join a house party at Lakeshire Park, Amelia grasps at the chance. If she can encourage a match between Clara and their host, Sir Ronald, then at least her sister will be taken care of.

Little does she know that another guest, the arrogant and overconfident Mr. Peter Wood, is after the same goal for his own sister. Amelia and Peter begin a rivalry that Amelia has no choice but to win. But competing against Peter—and eventually playing by his rules—makes Amelia vulnerable to losing the only thing she has left to claim: her heart.