The Christian church celebrates Lent, a period of penitential preparation for Easter. In Western churches it begins on Ash Wednesday, six and a half weeks before Easter, and provides for a 40-day fast

Carnival, the merrymaking and festivity that takes place in many Roman Catholic countries in the last days and hours before the Lenten season. The derivation of the word is uncertain, though it possibly can be traced to the medieval Latin carnem levare or carnelevarium, which means to take away or remove meat. This coincides with the fact that Carnival is the final festivity before the commencement of the austere 40 days of Lent, during which Roman Catholics in earlier times fasted, abstained from eating meat, and followed other ascetic practices. The historical origin of Carnival is also obscure. It possibly has its roots in a primitive festival honouring the beginning of the new year and the rebirth of nature, though it is also possible that the beginnings of Carnival in Italy may be linked to the pagan Saturnalian festival of ancient Rome.

Join us on Tuesday February 25 from 3:30-4:30pm at the Steele Memorial Library Children’s Dept. to learn about this special holiday that is celebrated in Brazil!

Stop in to make a craft, enjoy a snack, and celebrate Carnival!
No outside food is permitted in the library. 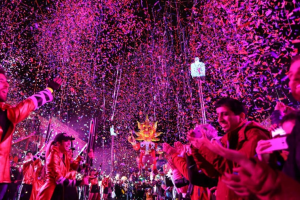