A Woman Is No Man, by Etaf Rum

In Brooklyn, eighteen-year-old Deya is starting to meet with suitors. Though she doesn’t want to get married, her grandparents give her no choice. History is repeating itself: Deya’s mother, Isra, also had no choice when she left Palestine as a teenager to marry Adam. Though Deya was raised to believe her parents died in a car accident, a secret note from a mysterious, yet familiar-looking woman makes Deya question everything she was told about her past. As the narrative alternates between the lives of Deya and Isra, she begins to understand the dark, complex secrets behind her community. 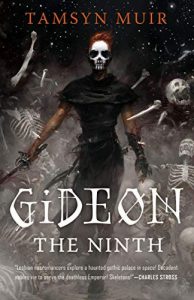 Gideon the Ninth (The Locked Tomb #1), by Tamsyn Muir

Tamsyn Muir’s Gideon the Ninth unveils a solar system of swordplay, cut-throat politics, and lesbian necromancers. Her characters leap off the page, as skillfully animated as necromantic skeletons. The result is a heart-pounding epic science fantasy.

Brought up by unfriendly, ossifying nuns, ancient retainers, and countless skeletons, Gideon is ready to abandon a life of servitude and an afterlife as a reanimated corpse. She packs up her sword, her shoes, and her dirty magazines, and prepares to launch her daring escape. But her childhood nemesis won’t set her free without a service.

Harrowhark Nonagesimus, Reverend Daughter of the Ninth House and bone witch extraordinaire, has been summoned into action. The Emperor has invited the heirs to each of his loyal Houses to a deadly trial of wits and skill. If Harrowhark succeeds she will become an immortal, all-powerful servant of the Resurrection, but no necromancer can ascend without their cavalier. Without Gideon’s sword, Harrow will fail, and the Ninth House will die. 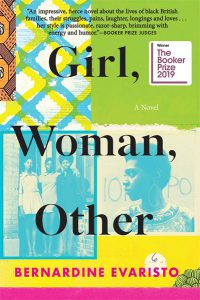 Girl, Woman, Other by Bernardine Evaristo

Teeming with life and crackling with energy — a love song to modern Britain and black womanhood.

Girl, Woman, Other follows the lives and struggles of twelve very different characters. Mostly women, black and British, they tell the stories of their families, friends and lovers, across the country and through the years.

Joyfully polyphonic and vibrantly contemporary, this is a gloriously new kind of history, a novel of our times: celebratory, ever-dynamic and utterly irresistible. 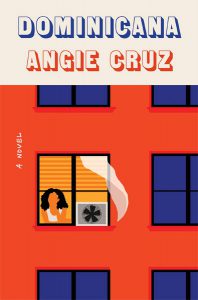 Fifteen-year-old Ana Cancion never dreamed of moving to America, the way the girls she grew up with in the Dominican countryside did. But when Juan Ruiz proposes and promises to take her to New York City, she has to say yes. It doesn’t matter that he is twice her age, that there is no love between them. Their marriage is an opportunity for her entire close-knit family to eventually immigrate. So on New Year’s Day, 1965, Ana leaves behind everything she knows and becomes Ana Ruiz, a wife confined to a cold six-floor walk-up in Washington Heights. Lonely and miserable, Ana hatches a reckless plan to escape. But at the bus terminal, she is stopped by Cesar, Juan’s free-spirited younger brother, who convinces her to stay.

As the Dominican Republic slides into political turmoil, Juan returns to protect his family’s assets, leaving Cesar to take care of Ana. Suddenly, Ana is free to take English lessons at a local church, lie on the beach at Coney Island, see a movie at Radio City Music Hall, go dancing with Cesar, and imagine the possibility of a different kind of life in America. When Juan returns, Ana must decide once again between her heart and her duty to her family. 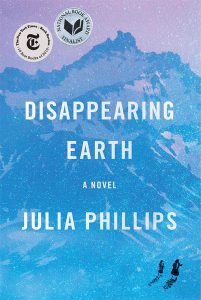 One August afternoon, on the shoreline of the Kamchatka peninsula at the northeastern tip of Russia, two girls – sisters, ages eight and eleven – go missing. The police investigation that follows turns up nothing. In the girls’ tightly-woven community, everyone must grapple with the loss. But the fear and danger of their disappearance is felt most profoundly among the women of this isolated place.

Taking us one chapter per month across a year on Kamchatka, this powerful novel connects the lives of characters changed by the sisters’ abduction: a witness, a neighbor, a detective, a mother. Theirs is an ethnically diverse population in which racial tensions simmer, and so-called “natives” are often suspected of the worst. As the story radiates from the peninsula’s capital city to its rural north, we are brought to places of astonishing beauty: densely wooded forests, open expanses of tundra, soaring volcanoes, and glassy seas.

Disappearing Earth is a multifaceted story of the intimate lives of women – their vulnerabilities and perils, their desires and dreams. It speaks to the complex yet enduring bonds of community as it offers startlingly vivid portraits of people reaching out to one another and, sometimes, reaching back to save each other.

​Spellbinding, moving – evoking a fascinating region on the other side of the world – this suspenseful and haunting story announces the debut of a profoundly gifted writer.