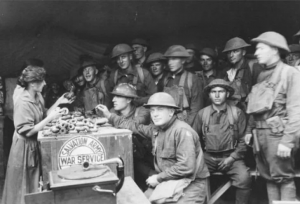 During World War I, volunteers who wanted to support troops were charged with preparing food to deliver to soldiers on the front lines in France. The Salvation Army dispatched over 250 women there, who found that battle-tested helmets were perfect for frying up to seven doughnuts at a time.

In 1938, the Salvation Army decided to honor these proclaimed “doughnut lassies” by recognizing an annual pastry holiday that could also raise awareness (and money) for their charitable efforts. National Doughnut Day was born.

Stop by the Steele Memorial Library on June 7th at 3:30pm to decorate your own doughnut, play doughnut games, and enjoy a doughnut storytime!