An Immense World: How Animal Senses Reveal the Hidden Realms Around Us by Ed Yong
A thrilling tour of the radically different ways that animals perceive the world that will fill you with wonder and forever alter your perspective, by Pulitzer Prize–winning science journalist Ed Yong

In An Immense World, Ed Yong coaxes us beyond the confines of our own senses, allowing us to perceive the skeins of scent, waves of electromagnetism, and pulses of pressure that surround us. We encounter beetles that are drawn to fires, turtles that can track the Earth’s magnetic fields, fish that fill rivers with electrical messages, and even humans who wield sonar like bats. We discover that a crocodile’s scaly face is as sensitive as a lover’s fingertips, that the eyes of a giant squid evolved to see sparkling whales, that plants thrum with the inaudible songs of courting bugs, and that even simple scallops have complex vision. We learn what bees see in flowers, what songbirds hear in their tunes, and what dogs smell on the street. We listen to stories of pivotal discoveries in the field, while looking ahead at the many mysteries that remain unsolved.

Funny, rigorous, and suffused with the joy of discovery, An Immense World takes us on what Marcel Proust called “the only true voyage . . . not to visit strange lands, but to possess other eyes.” 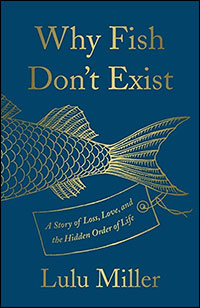 Why Fish Don’t Exist: A Story of Loss, Love, and the Hidden Order of Life by Lulu Miller
Part biography, part memoir, part scientific adventure, Why Fish Don’t Exist is a wondrous fable about how to persevere in a world where chaos will always prevail.

David Starr Jordan was a taxonomist, a man possessed with bringing order to the natural world. In time, he would be credited with discovering nearly a fifth of the fish known to humans in his day. But the more of the hidden blueprint of life he uncovered, the harder the universe seemed to try to thwart him. His specimen collections were demolished by lightning, by fire, and eventually by the 1906 San Francisco earthquake, — which sent more than a thousand discoveries, housed in fragile glass jars, plummeting to the floor. In an instant, his life’s work was shattered.

Many might have given up, given in to despair. But Jordan? He surveyed the wreckage at his feet, found the first fish that he recognized, and confidently began to rebuild his collection. This time, he introduced one clever innovation that he believed would at last protect his work against the chaos of the world.

When NPR reporter Lulu Miller first heard this anecdote in passing, she took Jordan for a fool — a cautionary tale in hubris, or denial. But as her own life slowly unraveled, she began to wonder about him. Perhaps instead he was a model for how to go on when all seemed lost. What she would unearth about his life would transform her understanding of history, morality, and the world beneath her feet. 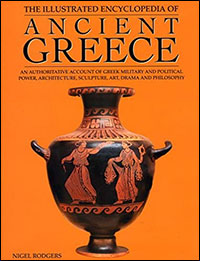 The Illustrated Encyclopedia of Ancient Greece by Nigel Rodgers

A brilliantly readable exploration of developments in politics, culture, art and warfare in the ancient Greek world. Strikes a deft balance between overview and detail. Informed by scholarly sources yet accessible to all readers. Beautifully illustrated with dozens of full color photographs of historic sites and works of art that make the narrative vibrant and real.