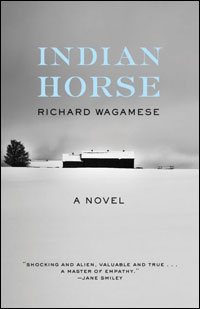 After being taken forcibly from his family, Saul Indian Horse is placed in an abusive boarding school determined to expunge his Ojibway traditions and knowledge. But he finds salvation each morning at dawn, practicing hockey alone on the school’s makeshift ice rink. Saul’s gift is undeniable: He quickly rises from his school’s all-Ojibway team to the white-dominated regional circuit. As his skills improve and he gains notoriety, however, each of his victories on the ice is met by racism and hate. As the years pass, Saul must reconcile his passion – the game he loves, that allowed him to escape poverty – with the harshness of a world that will never make him entirely welcome.

Unfolding against the bleak loveliness of Northern Ontario – all rock, marsh, bog, and cedar – this is a singular story of resilience from a beloved storyteller. 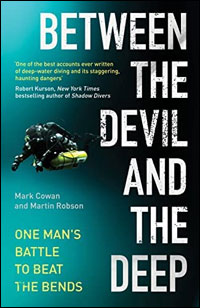 Between the Devil and the Deep: One Man’s Battle to Beat the Bends by Mark Cowan & Martin Robson

Between the Devil and the Deep is the first book to tell the terrifying true story of what it feels like to get the bends, taking you inside the body and mind of a man who suffered the unthinkable. Writer Mark Cowan also explores the grimly fascinating history of decompression sickness, the science behind what causes the disease, and the stories of the forgotten divers who pushed the limits of physical endurance to help find a solution.

In the winter of 2012, Robson was part of an expedition to Blue Lake, southern Russia, which sought to find a submerged cave system never seen by the human eye. On the final day of the expedition disaster struck: just 75 feet down, he was ambushed by the bends. Robson knew that if he continued up to the surface he would probably die before help arrived. Instead, he sank back into the water, gambling on an underwater practice most doctors believe is a suicidal act. Soon the only hope he had of saving his life would rest in the hands of a dramatic mercy mission organized at the highest levels of the Russian government. 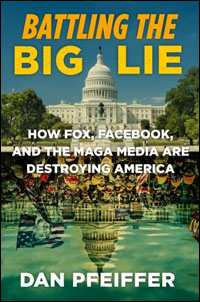 Battling the Big Lie: How Fox, Facebook, and the MAGA Media Are Destroying America by Dan Pfeiffer

In BATTLING THE BIG LIE, bestselling author Dan Pfeiffer dissects how the Right Wing built a massive, billionaire funded disinformation machine powerful enough to bend reality and nearly steal the 2020 election. From the perspective of someone who has spent decades on the frontlines of politics and media, Pfeiffer lays out how the Right Wing media apparatus works, where it came from, and what progressives can do to fight back against disinformation.

Over a period of decades, the Right Wing has built a massive media apparatus that is weaponizing misinformation and spreading conspiracy theories for political purposes. This “MAGA Megaphone”⁠—personified by Fox News and fueled by Facebook⁠—is waging war on the very idea of objective truth…and they are winning. This disinformation campaign is how Donald Trump won in 2016, almost won in 2020, and why the United States is incapable of addressing problems from COVID-19 to climate change.

A functioning democracy depends on a shared understanding of reality. America is teetering on the edge because one of the two parties in our two-party system views truth, facts, and science as their opponent. BATTLING THE BIG LIE is call to arms for anyone and everyone that cares about truth and democracy.