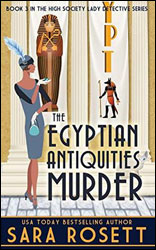 An opulent London townhouse, a mummy curse . . . and a plucky lady detective. It’s October, 1923, and Olive Belgrave has a new case. Her client, Lady Agnes doesn’t believe in curses, and she hires Olive to prove her Egyptologist uncle wasn’t the victim of a malevolent mummy. Olive investigates and discovers the truth is much worse–it’s murder.

Can Olive debunk the curse and reveal the true culprit before the supposed curse claims another victim? 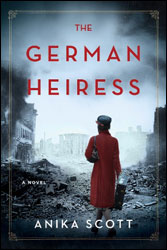 The German Heiress
by Anika Scott

Clara Falkenberg, once Germany’s most eligible and lauded heiress, earned the nickname “the Iron Fräulein” during World War II for her role operating her family’s ironworks empire. It’s been nearly two years since the war ended and she’s left with nothing but a false identification card and a series of burning questions about her family’s past. With nowhere else to run to, she decides to return home and take refuge with her dear friend, Elisa.
Narrowly escaping a near-disastrous interrogation by a British officer who’s hell-bent on arresting her for war crimes, she arrives home to discover the city in ruins, and Elisa missing. As Clara begins tracking down Elisa, she encounters Jakob, a charismatic young man working on the black market, who, for his own reasons, is also searching for Elisa. Clara and Jakob soon discover how they might help each other—if only they can stay ahead of the officer determined to make Clara answer for her actions during the war. 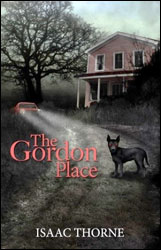 The Gordon Place
By Isaac Thorne

Lost Hollow constable Graham Gordon just walked into his abandoned childhood home for the first time in twenty years. Local teenagers have been spreading rumors about disembodied screams coming from inside. Now, thanks to a rickety set of cellar stairs and the hateful spirit of his dead father, he might never escape.

Meanwhile, Channel 6 News feature reporter Afia Afton—whose father is the victim of a local decades-old hate crime—is meeting with town administrator Patsy Blankenship. Her mission is to develop a ghost story feature for a special to air on the station’s Halloween broadcast. When Patsy tells her about the screams at the Gordon place, the past and the present are set on a collision course with potentially catastrophic results. 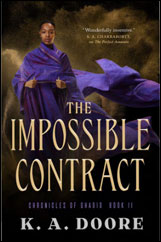 The Impossible Contract
(The Chronicles of Ghadid #2)
by K.A. Doore

Thana has a huge reputation to live up to as daughter of the Serpent, who rules over Ghadid’s secret clan of assassins. Opportunity to prove herself arrives when Thana accepts her first contract on Heru, a dangerous foreign diplomat with the ability to bind a person’s soul under his control.

She may be in over her head, especially when Heru is targeted by a rival sorcerer who sends hordes of the undead to attack them both. When Heru flees, Thana has no choice than to pursue him across the sands to the Empire that intends to capture Ghadid inside its iron grip. Note: The Perfect Assassin is the first title in the series. 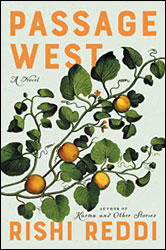 1913: Ram Singh arrives in California’s Imperial Valley, reluctantly accepting his friend Karak’s offer to come work on a small cantaloupe farm. Ram is unmoored: fleeing a traumatic incident in Oregon, he desperately longs to return to his wife and newborn son in India—but is duty-bound to make his fortune first.

In the Valley, civilization is still new and the rules are ever-shifting. Alongside Karak, his uncle Jivan, and Jivan’s nephew Amarjeet, Ram joins in the struggle to make ends meet as a sharecropper in the unforgiving desert. The Valley is full of immigrants from other continents and the stakes are unceasingly high—just one bad harvest or unfair sale could destabilize the entire family. As anti-immigrant sentiment begins to rise among the white Valley residents, and as new laws are passed to support their position, all immigrants are threatened and there is murder in the air. The livelihood for which the family sacrificed everything is suddenly at risk. And when a simmering rivalry develops between Ram and Karak, the tensions of life in the West threaten to finally boil over. 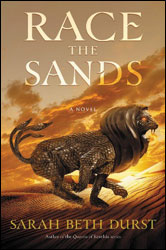 Life, death, and rebirth—in Becar, everyone knows that who you are in this life will determine what you are in your next life. The augurs can read your fate in your aura: hawk, heron, tortoise, jackal, human. Armed with that knowledge, you can change your destiny with the choices you make, both in this life and your next. But for the darkest individuals, there is no redemption: you come back as a kehok, a monster, and you will always be a kehok for the rest of time.

Unless you can win the Races.

As a professional trainer, Tamra was an elite kehok rider. Then a tragic accident on the track shattered her confidence, damaged her career, and left her nearly broke. Now Tamra needs the prize money to prevent the local temple from taking her daughter away from her, and that means she must once again find a winning kehok, and a rider willing to trust her.

Raia is desperate to get away from her domineering family and cruel fiancé. As a kehok rider, she could earn enough to buy her freedom. But she can’t become good enough to compete without a first-rate trainer.

Impressed by the inexperienced young woman’s determination, Tamra hires Raia and pairs her with a strange new kehok with the potential to win—if he can be tamed.

But in this sport, if you forget you’re riding on the back of a monster, you die. Tamra and Raia will work harder than they ever thought possible to win the deadly Becaran Races—and in the process, discover what makes this particular kehok so special. 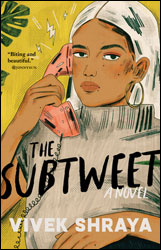 The Subtweet
by Vivek Shraya

Everyone talks about falling in love, but falling in friendship can be just as captivating. When Neela Devaki’s song is covered by internet-famous artist Rukmini, the two musicians meet and a transformative friendship begins.

But as Rukmini’s star rises and Neela’s stagnates, jealousy and self-doubt creep in. With a single tweet, their friendship implodes, one career is destroyed, and the two women find themselves at the center of an internet firestorm. 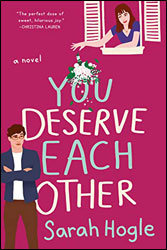 You Deserve Each Other
by Sarah Hogle

Naomi Westfield has the perfect fiancé: Nicholas Rose holds doors open for her, remembers her restaurant orders, and comes from the kind of upstanding society family any bride would love to be a part of. They never fight. They’re preparing for their lavish wedding that’s three months away. And she is miserably and utterly sick of him.

Naomi wants out, but there’s a catch: whoever ends the engagement will have to foot the nonrefundable wedding bill. When Naomi discovers that Nicholas, too, has been feigning contentment, the two of them go head-to-head in a battle of pranks, sabotage, and all-out emotional warfare. 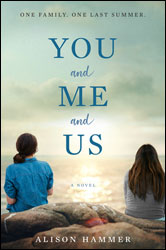 You and Me and Us
by Alison Hammer

Alexis Gold knows how to put the “work” in working mom. It’s the “mom” part that she’s been struggling with lately. Since opening her own advertising agency three years ago, Alexis has all but given up on finding a good work/life balance. Instead, she’s handed over the household reins to her supportive, loving partner, Tommy. While he’s quick to say they divide and conquer, Alexis knows that Tommy does most of the heavy lifting—especially when it comes to their teenage daughter, CeCe.

Their world changes in an instant when Tommy receives a terminal cancer diagnosis, and Alexis realizes everything she’s worked relentlessly for doesn’t matter without him. So Alexis does what Tommy has done for her almost every day since they were twelve-year-old kids in Destin, Florida—she puts him first. And when the only thing Tommy wants is to spend one last summer together at “their” beach, she puts her career on hold to make it happen…even if it means putting her family within striking distance of Tommy’s ex, an actress CeCe idolizes.

But Alexis and Tommy aren’t the only ones whose lives have been turned inside out. In addition to dealing with the normal ups and downs that come with being a teenager, CeCe is also forced to confront her feelings about Tommy’s illness—and what will happen when the one person who’s always been there for her is gone. When the magic of first love brings a bright spot to her summer, CeCe is determined not to let her mother ruin that for her, too. 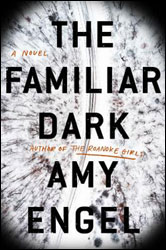 The Familiar Dark
by Amy Engel

Set in the poorest part of the Missouri Ozarks, in a small town with big secrets, The Familiar Dark opens with a murder. Eve Taggert, desperate with grief over losing her daughter, takes it upon herself to find out the truth about what happened. Eve is no stranger to the dark side of life, having been raised by a hard-edged mother whose lessons Eve tried not to pass on to her own daughter. But Eve may need her mother’s cruel brand of strength if she’s going to face the reality about her daughter’s death and about her own true nature. Her quest for justice takes her from the seedy underbelly of town to the quiet woods and, most frighteningly, back to her mother’s trailer for a final lesson. 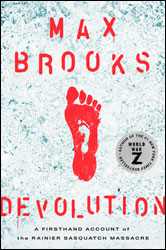 Devolution: A Firsthand Account of the Rainier Sasquatch Massacre
by Max Brooks

As the ash and chaos from Mount Rainier’s eruption swirled and finally settled, the story of the Greenloop massacre has passed unnoticed, unexamined . . . until now.

But the journals of resident Kate Holland, recovered from the town’s bloody wreckage, capture a tale too harrowing–and too earth-shattering in its implications–to be forgotten.

In these pages, Max Brooks brings Kate’s extraordinary account to light for the first time, faithfully reproducing her words alongside his own extensive investigations into the massacre and the legendary beasts behind it.

Kate’s is a tale of unexpected strength and resilience, of humanity’s defiance in the face of a terrible predator’s gaze, and inevitably, of savagery and death.

Yet it is also far more than that.

Because if what Kate Holland saw in those days is real, then we must accept the impossible. We must accept that the creature known as Bigfoot walks among us–and that it is a beast of terrible strength and ferocity. 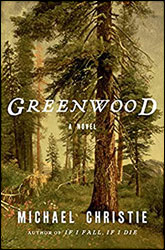 It’s 2034 and Jake Greenwood is a storyteller and a liar, an overqualified tour guide babysitting ultra-rich vacationers in one of the world’s last remaining forests. It’s 2008 and Liam Greenwood is a carpenter, fallen from a ladder and sprawled on his broken back, calling out from the concrete floor of an empty mansion. It’s 1974 and Willow Greenwood is out of jail, free after being locked up for one of her endless series of environmental protests: attempts at atonement for the sins of her father’s once vast and violent timber empire. It’s 1934 and Everett Greenwood is alone, as usual, in his maple syrup camp squat when he hears the cries of an abandoned infant and gets tangled up in the web of a crime that will cling to his family for decades.

And throughout, there are trees: thrumming a steady, silent pulse beneath Christie’s effortless sentences and working as a guiding metaphor for withering, weathering, and survival. A shining, intricate clockwork of a novel, Greenwood is a rain-soaked and sun-dappled story of the bonds and breaking points of money and love, wood and blood—and the hopeful, impossible task of growing toward the light.