The year is 1962: the Cuban Missile Crisis brought the world close to nuclear annihilation, John Glenn became the first American to orbit the Earth, and Sam Walton opened the first Wal-Mart in Arkansas. Meanwhile the Horseheads Public Library moved for the fourth time in eighteen years. Clearly it was time to find a permanent location for the library.

Fund raising efforts intensified as the library board sought donations from the community. The Jayceess conducted annual auctions which included antiques, household goods, even automobiles to raise funds for the Horseheads Library construction.  Other community groups such as the Horseheads Women’s Club and over 300 individuals and businesses, contributed to the construction fund to the tune of $55,000. The library also received $57,960 from a New York State Grant. The library was still short funds. However, the Belle Johnson Estate generously donated the remaining funds required to build the new library. 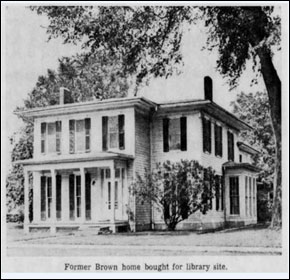 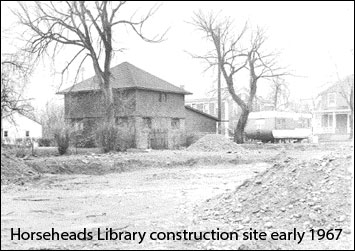 The library cost approximately $153,000 to build. Adjusting for inflation, the cost in 2019 would have been $1,178,860. The funds raised by the Horseheads community combined with a grant from New York State and a generous bequest demonstrated how the community recognized the importance of the public library. For all intents and purposes they “paid cash,” for the library building.  Nowadays capital projects usually require a taxpayer approved bond essentially indebting the library for so long that takes a generation to pay back.

While the library’s official name was and still is the Horseheads Free Library, due to her tireless work in creating, and fund raising, the library building was named the Ruth B. Leet Memorial Library. In July 1967 the library opened to the public with over 17,570 library items in its collection and three paid staff members.  The official opening occurred on October 2, 1967. And the rest is history….

2 Replies to “History of Public Library Service in Horseheads, NY Part 3—a Community Builds a Library”