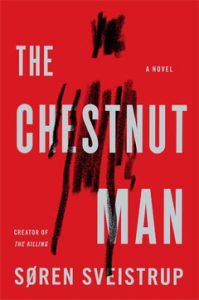 The Chestnut Man, by Søren Sveistrup   A psychopath is terrorizing Copenhagen. His calling card is a “chestnut man”—a handmade doll made of matchsticks and two chestnuts—which he leaves at each crime scene.

Cold Storage, by David Koepp   A wild and terrifying adventure about three strangers who must work together to contain a highly contagious, deadly organism.

The Dutch House, by Ann Patchett   At the end of the Second World War, Cyril Conroy combines luck and a single canny investment to begin an enormous real estate empire. His first order of business is to buy the Dutch House, a lavish estate in the suburbs outside of Philadelphia. Meant as a surprise for his wife, the house sets in motion the undoing of everyone he loves.

A Girl Named Anna, by Lizzy Barber   Anna has always been taught that her Mamma’s rules are the only path to follow. But, on her eighteenth birthday, she defies her Mamma for the first time in her life, and goes to Astroland. She’s never been allowed to visit Florida’s biggest theme park, so why, when she arrives, does everything about it seem so familiar? 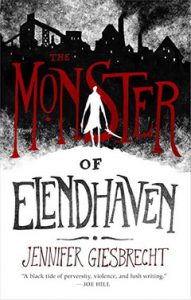 The Monster of Elendhaven, by Jennifer Giesbrecht    The Monster of Elendhaven is a dark fantasy, a twisted tale of revenge set in an original world as oily and real as Jack the Ripper’s London. After a thing with no name washes up on the docks, empty, alone, and unable to die, he becomes obsessed with a frail young man who can twist minds with magic.

The Secrets We Kept, by Lara Prescott   At the height of the Cold War, two secretaries are pulled out of the typing pool at the CIA and given the assignment of a lifetime. Their mission: to smuggle Doctor Zhivago out of the USSR, where no one dare publish it.

Steel Crow Saga, by Paul Krueger    Four destinies collide in a unique fantasy world of war and wonders, where empire is won with enchanted steel and magical animal companions fight alongside their masters in battle.

Summer of Secrets, by Nikola Scott    Two women – born decades apart – each faced with the knowledge that a man in their lives is not what he seems.

This Tender Land, by William Kent Krueger   A magnificent novel about four orphans on a life-changing odyssey during the Great Depression.

Violet, by Scott Thomas   The disturbing tale of a woman haunted by her long-abandoned imaginary friend.

All of these titles have a release date in September, so watch for them and enjoy!