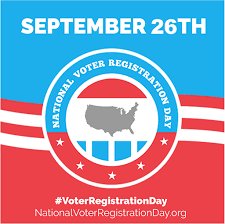 Tuesday, September 26 is National Voter Registration Day!  Are you registered to vote? Did you recently move (change address), turn 18, get married (change your name), complete parole, or would you like to change your party affiliation?
From 12pm-3pm on Sept 26, a table will be up at the Steele Memorial Library with voter registration forms. We can take completed forms to the Board of Elections of Chemung County.

If you can’t make it during those hours, there will still be voter registration forms available at any CCLD library for you to fill in and mail in yourself.

Click here for information on registering online through the NY DMV

The next general election is Tuesday, November 7, 2017.

IN PERSON REGISTRATION (N.Y. Election Law Sections 5-210, 5-211, 5-212)
You may register at your local board of elections or any state agency participating in the National Voter Registration Act, on any business day throughout the year but, to be eligible to vote in the General Election, your application must be received no later than October 13th. If honorably discharged from the US Military or have become a naturalized US Citizen after October 13th, you may register in person at the Board of Elections up until October 28th.

CHANGE OF ADDRESS (N.Y. Election Law Section 5-208(3))
Notices of change of address from registered voters received by October 18th by a county board of elections must be processed and entered in the records in time for the General Election.

CHANGE OF ENROLLMENT (N.Y. Election Law Section 5-304(3))
An application to change one’s party enrollment for 2018 must be received by the board of elections no later than October 13th.

On November 7, registered voters can decide whether NYS should hold a constitutional convention.
The New York State Constitution mandates that every 20 years voters will be asked the following question: “Shall there be a convention to revise the constitution and amend the same?” The next referendum will be held on November 7, 2017. It presents a constitutional choice of profound importance; a once in a generation opportunity for the State to reinvent itself. We will not have this opportunity again for another 20 years.
— http://www.nysba.org/nyconstitution/

How is Chemung County doing in terms of people registered to vote?  According to the NYS Board of Elections, there are currently 53, 584 registered voters of all parties in Chemung County (though 2,768 of those are labeled as inactive). The US Census data from 2016 shows that there are currently 86,322 people in Chemung county, 21.6% of whom are under the age of 18. That makes for 67,676 people who are able to vote. That means that 14,092 people in Chemung County are not registered to vote. Add that to the 2,768 inactive voters, that leaves 16,860. That is nearly 25% of people who could vote that are not voting.

Our NYS Senator is Thomas O’Mara

Our NYS Assemblymember is Christopher Friend

Our US Congressman is Tom Reed

Our US Senators are Charles Schumer and Kristen Gillibrand

Click here to look up up NYS district maps and elected officials. 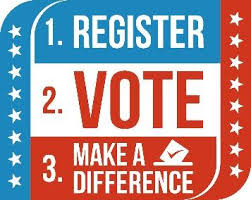