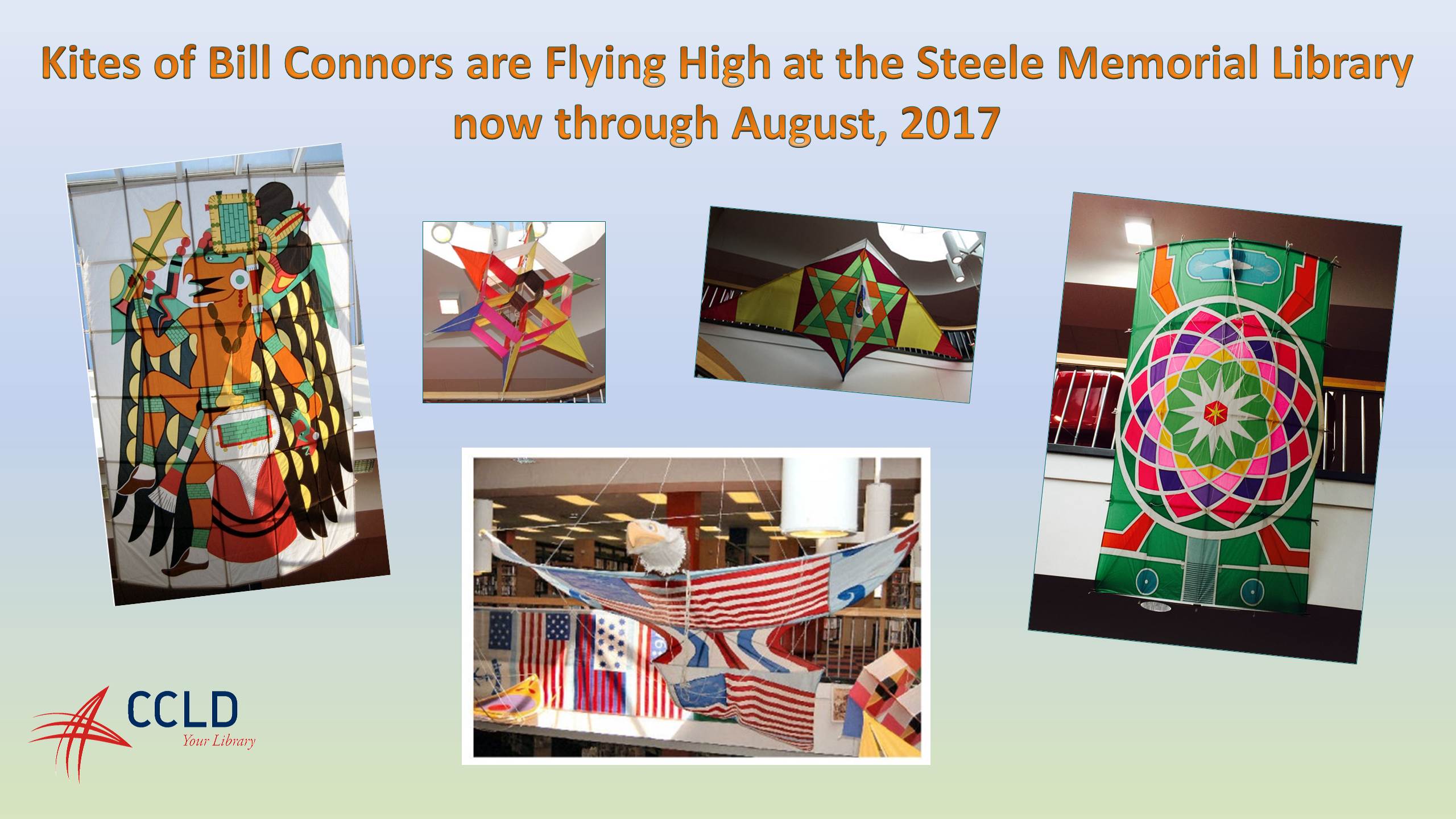 A long time tradition of displaying handmade kites of a local resident has returned to the Steele Memorial Library. From 1988 – 2006, visitors were treated to the kite artistry of Bill Connors. They were hung every spring high into the sky lights bursting with color and unique design.

Bill would be pleased. Bill wanted local area residents to enjoy them. An engineer who lived in Horseheads and passed away in 2012, Bill spent his early retirement years constructing the kites based on traditional East Asian designs. Not only did Bill donate the kites to the library, he assisted in hanging them and taught library staff how to do it. Bill designed the kites and sewed them himself on a home machine.

This month, library staff hung them in honor of Bill with the intent of sharing his amazing talents with the community. Children and adults both are fascinated by the color combinations and size. The kites have been exhibited around the world, where they’ve won numerous prizes in competition.

With elegant tails strung across the atrium, the Song Hong (meaning 2 sections) is reminiscent of early Chinese kites. The idea of mounting a smaller version of the main sail behind it may remind children of a baby bird flying behind its mother.

The 9’X12’ Shirone kite is actually a scaled down version of the giant kites flown in the annual kite battle at Shirone, Japan. Bill’s inspiration for the dancing Indian design came from a copper plate found in Georgia.

“Edo” is the old name of Tokyo. Bill’s Edo-Dako rectangular-shaped kite is one of the traditional Tokyo style kites. He based his design, however, on Michelangelo’s Piazza del Campidoglio in Rome.

The huge Balinese Janggan’s head is a bald eagle while the 3 meter long tail represents early explorers’ flags that flew up to the close of the Revolutionary War. The tail runs almost the entire length of the balcony.

Come to the library to see the Song Hong, Shirone, Edo-Dako kites and more. Every kite on display has flown in the sky. “Couldn’t have them up there if they didn’t fly”, Bill always said.

The kites will remain on display until the end of August. A self-guided tour brochure is available at the library. Library hours are Monday – Thursday, 9:00am – 9:00pm, Friday and Saturday, 9:00-am-5:00pm. The library will be closed on Saturdays for the summer beginning on May 27th.

By Chris Corter, Librarian 3 at CCLD