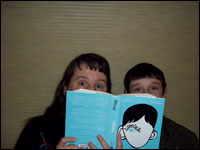 Now here is my secret. It is very simple. It is only with one’s heart that one can see clearly. What is essential is invisible to the eye.

My son, Benjamin, and I recently finished reading Wonder by RJ Palacio together. The story follows 5th grader August Pullman as he begins his journey to Beecher Prep School after many years of home schooling. August is funny, smart, and kind, but his parents are concerned that he will not fit in. In fact, his father feels Auggie’s mother is being overly protective, but deep down he is also afraid for his son. Dad says, “It’s like taking a lamb to slaughter.” Why?  Because August is different.

Ben: My interpretation of “taking a lamb to slaughter” is taking something good and killing it. In the book, Auggie is the lamb and middle school is the “slaughter.”

Despite all of his great qualities, August doesn’t look like other kids. He has a rare genetic disorder that caused a “craniofacial abnormality.” Even though Auggie has been through many surgeries, his eyes aren’t where they should be, he has trouble talking and eating, and he has almost no visible ears. When he was little, kids on the playground would recoil in fear. As he works his way through the acceptance process in middle school, he overhears the word “alien” more than once. He feels the pain of their stares or of quick glances and avoidance.

In Wonder, the kids are afraid to touch Auggie and school-wide they say he has “The Plague.”  At a recent Human Relations Commission meeting, a new member shared a story of her five year old daughter who had a classmate who was afraid to touch her because her skin might turn brown too. Especially in communities that lack diversity, acceptance is impeded by lack of familiarity and understanding.

Ben: Kids in middle school do this all the time. For example, if a kid is a “dork,” and he touches you, then you have to pass “it” along to someone else so you don’t have “it” anymore.

Palacio narrates her story not only with Auggie’s poignant words and feelings, but she includes other voices to tell Auggie’s story. His older sister, Via, tells what it is like to be the sibling in a family with a child who requires so much extra care and attention. While she is jealous of August’s special bond with their parents, she also vehemently defends him when people are cruel. She demonstrates the struggle of sibling rivalry where you genuinely wish the best for your siblings, but you don’t want them to have preferential treatment.

Ben: That’s like my friend and his sister. He gets annoyed with her, but he never really wants anything bad to happen to her. When kids pick on her because she has special needs, he protects her.

Although the author never tells the story through the parents’ eyes, I might have a clue to their point of view. My nephew has a three year old child with special needs. Andrew lived the first year of his life at the Boston Children’s Hospital, he had a heart transplant before he was one year old, a curvature of his spine impedes his mobility, and he still receives most of his nutrition and medications through a feeding tube. The doctors had predicted a life of pain for Andrew. When I see his smiling photos on Facebook or hear him laugh as he plays, I know they were wrong. A recent Youtube video shows him at his third birthday party racing through the kitchen with a mobility device as family and friends cheer him on. It hasn’t been easy for his parents, but they show great spirit and determination. If Andrew never gave up the struggle, why should they give up on him? A new, healthy baby came into their house about a year ago. His mother says, “Compared to Andrew, he’s easy.”

For Auggie, and for most middle schoolers, the hardest part of the first day of school is lunch. Who will they sit with at lunch? When Auggie sits down, no one sits with him. Finally, a girl named Summer sits with him because she feels sorry for him. Through the story, we see the friendship with Summer grows because she opens herself up to accept him. The reader learns that people who are different don’t want your pity. They want inclusion and acceptance, and, like Andrew’s parents, they have a better quality of life if they focus on what they can do rather than what they can’t.

Ben: The first day of middle school, I was worried about who I would sit with at lunch. I found a table with someone I knew from my elementary school. In January, I switched tables because I had made some new friends that I liked better.

Wonder focuses on Auggie’s journey to acceptance by his peers.  As events unfold, Auggie’s parents offer that he may quit school at any time, but he doesn’t. He plods through the school year, meeting each academic and social challenge. Recently I read a newspaper article that Cornell University  researchers have found a way to “grow” customized ears using a 3-D printer and injections of living cells. I thought of Auggie. Because most of his stigma stems from his looks, he wishes he could have ears. He is disappointed when his parents make him get hearing aids, but discovers that the long time underwater feeling finally disappears!  At this point in the story, students in the school have come to accept Auggie, and no one says a thing about his new hearing aids. The reader comes to see that the story is not only about family, friends, and peers accepting Auggie for who he is. It is also about Auggie accepting himself.

Ben: If I were Auggie, I would not really want to go to middle school.  Middle school students can be very mean.  Auggie continued school even when his parents offered to allow him to quit. Auggie had a lot of courage.