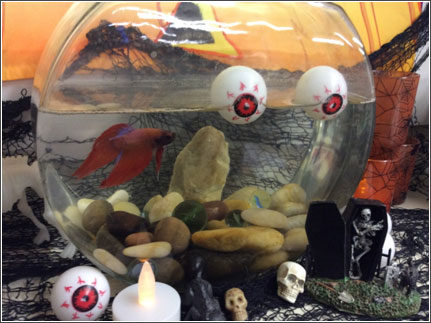 The Van Etten Library has adopted a pet fish. He is a red Beta fish and has quite a personality. Right now he is celebrating Halloween, as seen in the picture. (He is so photogenic, and he loves getting his picture taken!!)

I could not believe how excited the younger patrons became when they learned that the library now had a fish. They would walk in the door and run right over to look at the fish sitting on the shelf at the circulation desk. So many questions about the fish; “Where did he come from?”, “What does he eat?”, “How old is he?” Once, I took the fish home on vacation with me. While I was away so many young ones asked where the fish had gone. My sub, Ms. Doris Jean, simply told them that he went on vacation with Ms. Michelle. On one occasion, a mom came rushing in to check if the fish was here, and she then said, “Oh good the fish is here!” She then shared with me that her two children were so excited about seeing the library fish that it was all they talked about the entire car ride to the library.

So we began a contest to name the library fish. We had some very creative entries; Red, Beto, Nemo, Kitty, Beanie, Sunflower, Brutus Buckeye, Bubbles, and the list went on with 25 potential winners. The difficult part was choosing the best name for the library fish. We really wanted to pick a name that would reflect some of the character of the Town of Van Etten and its residents. The most popular name on the list was ‘Finn’, with three entries. Since this was the most popular entry, I decided to go with it. But, not just because the fish literally has fins…the town of Van Etten actually has many residents of Finnish descent.

According to the Tioga History website, around 1909 the Finnish people began to move into the Van Etten area and purchased impoverished farms. They then created the Spencer Cooperative Society which sold everything from groceries and feed to farm equipment and hardware (Alve, tiogahistory.org/Site/Spencer.html).

The New York Folklore website explains how many of the Finnish that settled in the Finger Lakes region were leaving the mines and factories of the Midwest in search of farm land. Over the next few decades about five hundred Finnish landowners arrived in the Finger Lakes. As dairy farming began to decline in the area, the Finnish revitalized farming in the region by starting chicken farms (http://www.nyfolklore.org/tradarts/archcoll/flarch.html). With the poultry industry in the Spencer/Van Etten communities becoming such a very large business, the Spencer Cooperative Society also began buying and selling eggs (Alve, tiogahistory.org/Site/Spencer.html).

I recently spoke with a Van Etten library patron who recalls working for the co-op years ago. She stated that the co-op was a vital part to the community in supporting the supply and demands of that time. She also explained that during WWII due to the rationing of other meats and with chicken being very viable and plentiful, the Van Etten community thrived with its chicken farms.  In fact, if you were to take a drive down the main road through Van Etten today (NY 224) you can see the many abandoned chicken houses used decades ago by the Finnish chicken farmers.

So, if you ever find yourself in this neck of the woods, you will know exactly what those big abandoned white buildings with many windows are, and you will remember their great importance to the Van Etten community at one time. You can also stop in and say hello to our Van Etten Library fish…Finn.