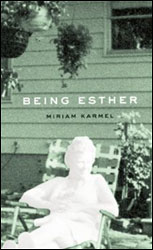 This past month I read two new books I loved; one fiction and one nonfiction about aging women, that I heartily recommend for anyone who is looking forward to their own future or to that of their parents.  It’s not often that I feel characters in fiction to be true, but reading Being Esther by Miriam Karmel, a first time novelist who has been a journalist and magazine writer, was like listening to a friend to whom you can tell anything. In one passage she says that she can no longer close the clasp on her watch so wears her deceased husband’s Timex with an expandable bracelet but, because it is too big, it moves around her wrist. She then says it is just like her husband, reliable but annoying. I became very fond of Esther, a witty, practical eighty-five year old straight shooter who ruminates about her life and relationships. If you search the book’s title in our online catalog (STARCat), you can read reviews and a summary that describes the book much better than I can (click on the title of the book on the results page).

The second book was titled Moving Miss Peggy : A Story of Dementia, Courage, and Consolation by Robert Benson. This is a nonfiction book by a son who describes how his family handled their mother’s aging with Alzheimer’s disease. The writing was lyrical but practical, with advice for others facing similar situations.

Let me know if you like these two books as well as I did.