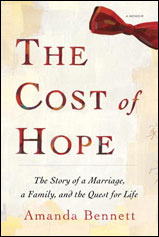 I remember National Health Care being a hot topic of discussion at parties of recent graduates of Harvard in the early 1960s and here we are in 2012 and NPR morning news woke me this morning, still talking about the House trying to reverse President Obama’s National Health Care Bill for the 30th time. This is the one that has just been declared legal by the Supreme Court. The book The Cost of Hope by Amanda Bennett is the story of the Health Care System in the United States and its cost for one couple as they move from state to state and different health care insurers for her career as a newspaper reporter and editor. I found her research into what she heard from doctors as a patient’s wife about her husband’s condition and what she learned as an investigative reporter about the condition fascinating.  The different doctors’ discussions and conclusions for lab reports, that the patient never sees, gave a whole new light on the discussions with our doctors that we often think of as the definitive facts.