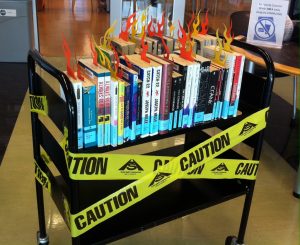 Every year since 1982, libraries put up caution tape and books and remind us that literature is often challenged and censored. In the 35-year history of Banned Books Week, over 11,000 books have been challenged.
Banned books range from contemporary bestsellers to centuries-old classics, from fictional narratives to historical and biographical nonfiction, and from children’s fairy tales to adult erotica.

Books that make people uncomfortable are routinely banned or challenged. People who are uncomfortable with a book’s perspective will try to remove the book from the shelves so no one else can read it. There are many reasons people cite for wanting a book removed, click here to read about all of them.  Many of the books challenged are books of great value, with unique and important viewpoints.  Many of these books are well-reviewed, prize-winning works that get people thinking and talking.  Perhaps the most ironic book that has been challenged is Fahrenheit 451, a book about how no books are allowed and firefighters burn any books they find. The tagline of Ray Bradbury’s most famous work reads, “Fahrenheit 451 – the temperature at which book paper catches fire, and burns…”

Yes, if we read books we will find books we do not like. But that is not sufficient reason to take the book away from everyone. Many times people challenge a book, it is because they misunderstand the message. One person’s mind does not reflect the mind of every reader. People must be free to access the information and make their own judgements about the work. Many books challenged one year, may, through the passage of time, be dropped from the lists of challenged items and no longer seem controversial. Some of these include Shel Silverstein’s A Light in the Attic, The Wonderful Wizard of Oz, Moby Dick, My Friend Flicka, and Merriam Webster’s Dictionary. This is why we recognize banned books week every year, to give a perspective on the ideas people tried to suppress in the past, and to get us to reflect on what is being suppressed today. 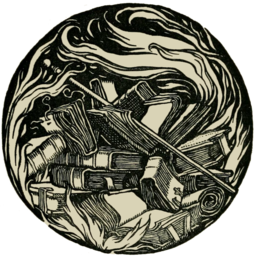 According to the American Library Association, only about 10% of challenged books are subsequently removed from shelves, largely due to courage of librarians, booksellers, publishers, journalists, teachers, and readers of all types who stand up for the freedom to read.

The freedom to read is essential to our democracy. It is continuously under attack. Private groups and public authorities in various parts of the country are working to remove or limit access to reading materials, to censor content in schools, to label “controversial” views, to distribute lists of “objectionable” books or authors, and to purge libraries. These actions apparently rise from a view that our national tradition of free expression is no longer valid; that censorship and suppression are needed to counter threats to safety or national security, as well as to avoid the subversion of politics and the corruption of morals. We, as individuals devoted to reading and as librarians and publishers responsible for disseminating ideas, wish to assert the public interest in the preservation of the freedom to read.

Many of the books that are most often challenged go on to become classics. Coincidence?  What makes a books a classic? It says something that people need to hear, and they say it well. They challenge us, move us, and get us to think and challenge our old ideas and beliefs. They make us grow.

The Library of Congress’s “Books that Shaped America” names books that have shaped our country, our thought, and our times. “The ‘Celebration of the Book’ at the Library of Congress demonstrates our recognition of books as the cornerstones of American culture and democracy,” said Librarian of Congress James H. Billington. On their overview page, the LOC explains,

Some of the titles on display have been the source of great controversy, even derision, yet they nevertheless shaped Americans’ views of their world and often the world’s view of the United States. As you go through this exhibition, we hope the books you see will inspire you to think of other “books that shaped America” and that you will share your choices for future lists at www.loc.gov/bookfest. Please tell us how you think your book shaped America.

The best reason not to ban books? Books really can change the world. Writing is a way for our best thinkers, writers, heroes, activists, scientists, and people of faith to share their hard-won experiences, deepest thoughts, and research with the rest of the world.  If we were to begin to silence their voices, we would lose access to that scholarship.

As Justice Douglas said in his “The One Un-American Act” in 1951,

“…the safety of our civilization lies in making freedom of thought and freedom of speech vital, vivid features of our life. Our proudest boast has been a system that makes belief in the unorthodox a permissible way of life. It is not because we want to destroy existing institutions, nor to undermine an orthodox faith that we make room for revolutionary ideas. Ideas, like the people who have them, need expression. The market place tests them—accepting a few, rejecting many. It is the interchange of ideas, the challenge to prejudices that give any people the resiliency to meet changing conditions…Restriction of free thought and free speech is the most dangerous of all subversions. It is the one un-American act that could most easily defeat us.”

So welcome Banned Books Week 2017!  Commemorate Banned Book Week by stopping by the library and grabbing a challenged book. Challenge yourself. Celebrate your right to read.

“Censorship is the enemy of truth, even more than a lie. A lie can be exposed; censorship can prevent us from knowing the difference.”  -journalist Bill Moyers

“If there is a bedrock principle underlying the First Amendment, it is that the government may not prohibit the expression of an idea simply because society finds the idea itself offensive or disagreeable.”

10 reasons for Banning Books, and 5 much better reasons not to

11 Books That Were Banned for Completely Ridiculous Reasons

Where the Wild Things Aren’t: On the Banning of Sendak

The Banned Books We Love