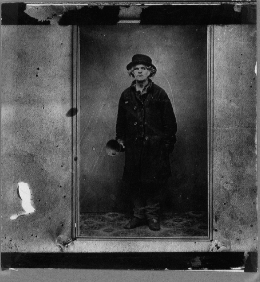 Ring in the new year with Elmira’s town crier from 1850-1870, Tom Tallada (Pictured here with his bell).

His wedding is described in the library’s “History of Tioga, Chemung, Tompkins, and Schuyler Counties, NY” on page 252.

The popularity of this individual was such that there was but little distinction shown in inviting guests, and the attendance was consequently very large, and not exclusively fashionable. They assembled at an early hour. The event was so notable that prominent citizens took the ceremonies in charge. The knot-tying, as stipulated, was to take place at twelve o’clock precisely, by John W. Wisner, Justice of the Peace, for which job Tom agreed to cut for him a cord of wood. The groom was habited in a long-tailed blue coat, with brass buttons. The coat, though much too small, was worn because it was loaned to him by his friend, George Kingsbury, and was bound together by a red sash tied round the waist. The village barber, duly sworn, tenderly shaved one-half of his face, under his instruction from the master of ceremonies, and a benevolent individual unearthed a three-cornered chapeau, which Tom was instructed was imperative for him to wear during the actual performance of the ceremony. As early as six o’clock the guests began to arrive, and long before the time appointed about all the men and boys of the town had congregated in front of the building. The whisky bottle was circulated freely, and Tom was plied with plenteous libations. By some mysterious accident his loving sweetheart spirited away. Tom was put on track, with a proper escort for a successful pursuit and recapture. Finally at the precise hour and minute she was brought back, and the ceremony performed, and they were, with all judicial gravity, pronounced “man and woman!” These words were the signal for the bride-kissing, which was done with the heartiest and most resonant smacks. So ardent were the salutations that a grand rush was made, and the fair bride nearly smothered with congratulations.