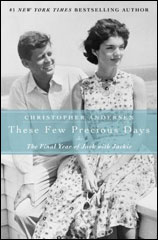 November 2013 is the fiftieth anniversary of the assassination of President John F. Kennedy and the publishing world has jumped on the bandwagon to print several new books on the topic. Everything is discussed and rehashed about the entire Kennedy Family and the assassination as well conspiracy theories about the assassination which are always a popular topic. We have bought several new books, fiction and nonfiction; we also have several in the regular stacks:  biography, true crime, and history sections.  Anyone with an interest can find lots to choose from. Some of the new additions are:

History will prove us right : inside the Warren Commission report on the assassination of John F. Kennedy by Howard P. Willens

Camelot’s court : inside the Kennedy White House by Robert Dallek

These few precious days : the final year of Jack with Jackie by Christopher P Andersen